Cash entry fee of $40 per angler is to be paid at the Lewes Harbour Marina Bait & Tackle Shop before 7am on May 19th, 2017. $20 of each entry will be donated to the Pancreatic Cancer Action Network.

This is a flounder tournament only. All state and federal regulations regarding fishing and boating apply.

Boundaries are from Rehoboth Bay Canal entrance to Roosevelt Inlet entrance, and Broadkill River to Oyster Rocks Road. Anglers must fish from a boat that is not moored to land.

Fishing time is from 7am - 3pm Friday May 19th, 2017. All fish weighed must have been caught on hook and line by a registered contestant. Fish must be weighed at Lewes Harbour Marina's scale any time after 7am, but no later than 4pm by Lewes Harbour Marina's clock. It is recommended that contending fish be weighed soon after they are caught, preferably alive. In the event of a tie for weigh, the fish that is weighed the earliest takes the prize. A Lewes Harbour Marina official has the right to disqualify a fish if evidence suggests it was not caught during the tournament. Only live/fresh fish will be counted. No frozen, brined or otherwise will count. NO EXCEPTIONS! 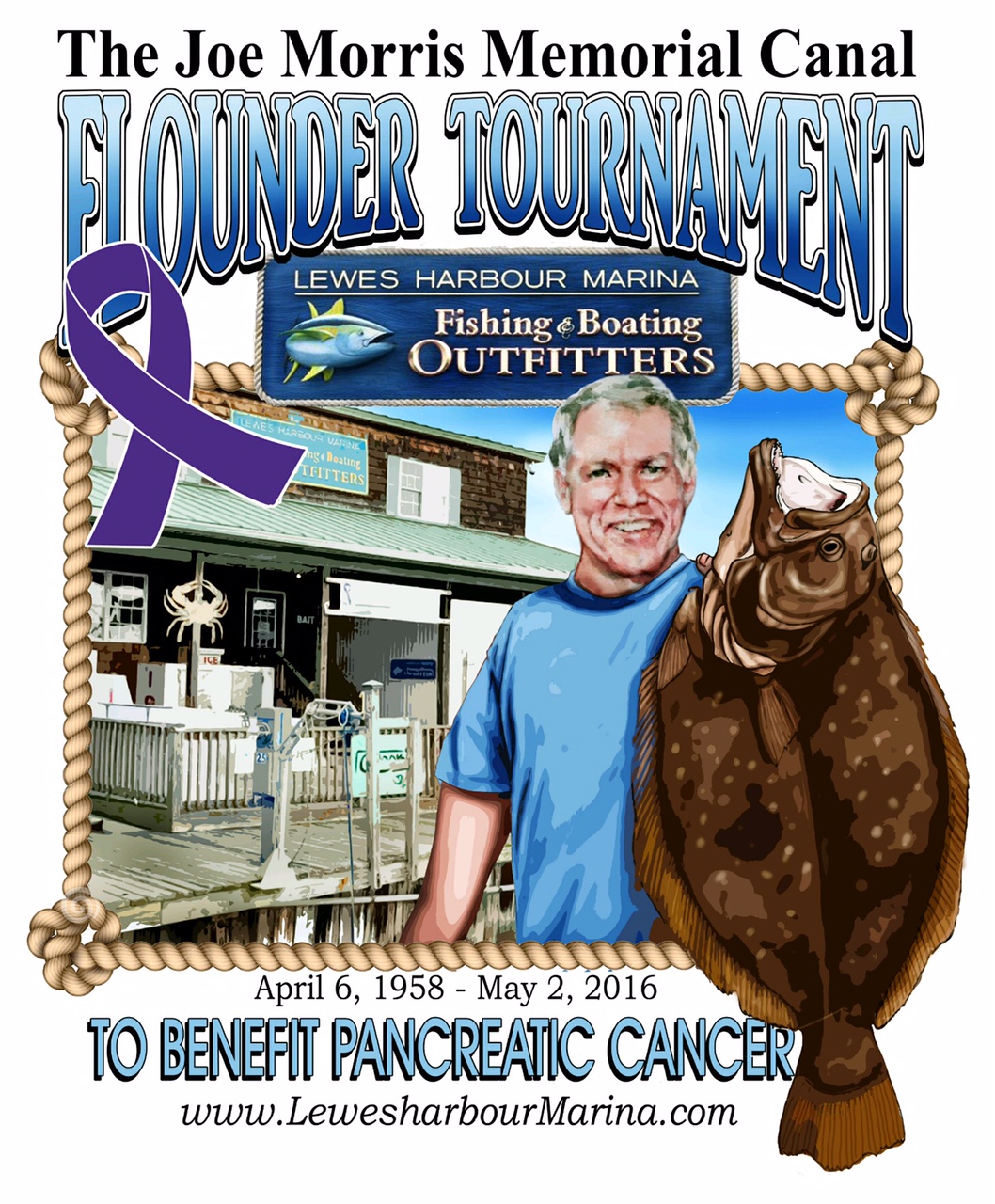 Value of prizes is determined by the number of entrances 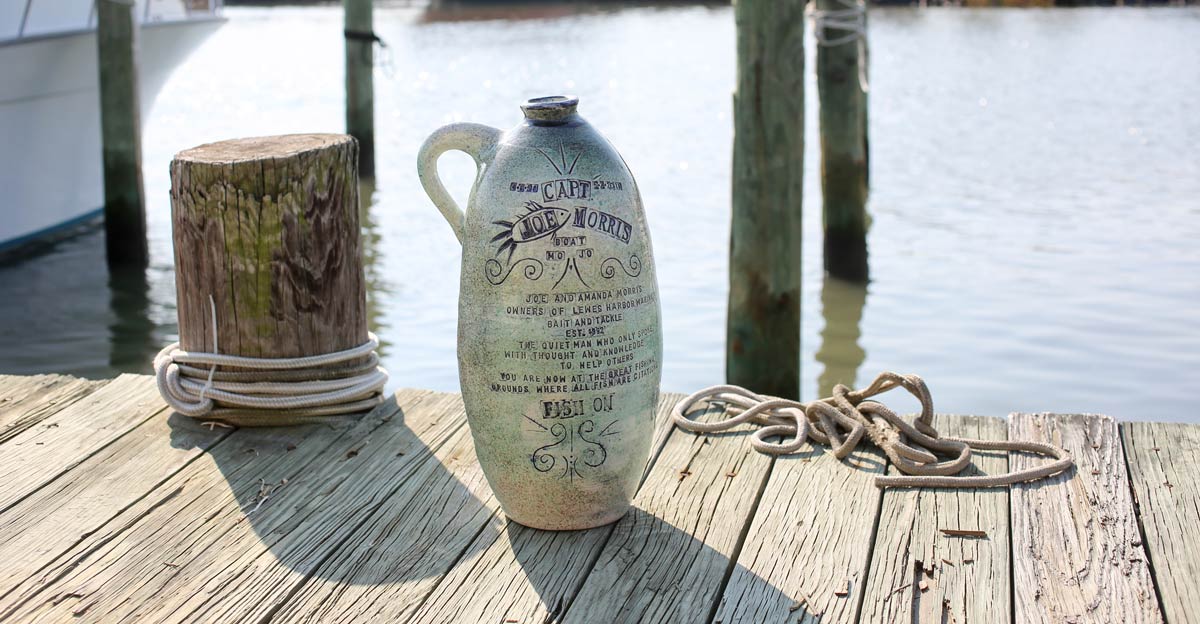 Allow me to begin with some of the words of the poet, William Wordsworth, from his Ode : Intimations of Immortality from Recollections of Early Childhood. The poem, by the way, is set during an early beautiful May morning.

There was a time when meadow, grove, and stream, the earth, and every common sight, to me did seem appareled in celestial light.

The sunshine is a glorious birth: but yet I know, where’er I go, there hath past away a glory from the earth

Though nothing can bring back the hour of Splendor in the grass, of glory in the flower, We will grieve not, rather find strength in what remains behind, in the primal sympathy which having been must ever be.

In the soothing thoughts that spring from human suffering, in the faith that looks through death…

My name is Jack Henriksen. Like all of you here today, I love to fish, and Joe Morris was my friend. We are all here today to show our respect for Joe, to mourn his loss, and to celebrate his life. We are also here to support and comfort Joe’s wife, Amanda, Joe’s parents and sister, Heather, as well as Amanda’s parents, Mr. and Mrs. Reid, and Amanda’s sisters and brother, Beth, Hope and Dennis.

As you may already know, Joe grew up in Coatesville, Pa. Joe graduated from Dickinson College with an undergraduate degree in economics. He began fishing at an early age acquiring the knowledge and skills that later helped Joe in writing articles on fishing, and eventually articles for fisherman magazine.

Joe and Amanda’s families attended the same church. I learned recently from Amanda Joe sang in the church choir, and he had a beautiful voice. Of course, attending the same church, Amanda knew Joe at a very young age. They did not date in high school - that would have required Joe, as a senior, to take out 4th or 5th grade Amanda. But apparently the families arranged for Joe and Amanda to meet several years later at a family gathering. Joe was about 31, and Amanda was about 24. According to Amanda, Joe asked Amanda that evening if he could call her for a date, and she said yes.

But time went by …and by …and he didn’t call. So Amanda called him. Joe told Amanda he was just about to call her. But my theory is Joe was applying his fishing theories to catching Amanda. Instead of calling her right away, he patiently waited until she could no longer resist, and by the time she called, she was hopelessly hooked. They married, started the tackle shop, worked side by side to make the business successful, and enjoyed 25 wonderful years. They were a great team. I especially loved the message from my wife Joe and Amanda always posted in the store, “Your wife called, and she said buy anything you want.”

During the winters, Joe and Amanda took a well deserved vacation at their home in the Florida Keys. They spent a lot of time fishing, at least as much time as the Key West winds would allow. Joe took me and another guy out once on his boat the MoJo. We were fishing deep water for grouper. I found it frustrating. Neither I nor the other guy could hook a fish. We’d drop down 200-300 feet and feel nothing. Joe would then suggest we should reel up and check our bait. It was gone. So every once in awhile Joe would drop a line. BAM!! Joe’s talent provided us that night a delicious dinner.

Joe was an incredibly hard worker. He spent long hours from before sunrise to after sunset to serve us fishermen. He cleaned thousands of fish for hundreds of people. He took your pictures. His pictures made your fish look really big. He told your story in the fisherman magazine. You became famous on Facebook. It was joy to come in from a day’s fishing, and sit in the shaded chairs of the Dead Poet Society, or some name to that effect, watch Joe clean your fish, and tell your fishing lies to your buddies and Joe. If you offered Joe a beer, he’d accept. I think his favorite was Yuengling Honey Brown. Now I don’t want to give you the impression Joe drank too much. He did not. But one time last year, a group of us came in from a sea bass trip on the Katydid, and we put up on the table 150 sea bass. It was going to take awhile to clean that batch. One of my friends on that trip, Ralph Short, kept giving Joe another beer. Wanting to take home some nice full fillets, untouched by human blood, I finally suggested to Ralph he wait until Joe was finished before offering any more beers. Joe gave that subtle smile chuckle we all had seen.

I don’t think I ever saw Joe get flustered. But one time, while visiting the shop, I looked out at the cleaning table, and Joe was surrounded by a group excitedly taking pictures. Joe was cleaning a table full of skate. As Joe took a break to grab a bag out of the bin next to my seat, I asked Joe what he charged to clean a skate. His reply… Not enough.

Joe and Amanda were great hosts. Now keep in mind, they had very little time to entertain, except during a northeaster. The seafood, and especially the chowder, was delicious. Also, Joe made the best cosmopolitans. I thinks working so hard, Joe savored these social gatherings. Joe always made you feel good.

On one occasion Joe tried really hard to get me on the cover of Fisherman Magazine. While fishing on the Top Fin, I caught a 14.8 pound taug. News of such a fish always travels fast in Lewes. In fact, when I stopped in the liquor store across the canal to buy some cooking sherry, telling the clerk I was going to use it to cook taug, the clerk asked me if I had seen the big taug caught that day. Anyway, the fisherman magazine came out. My picture with my 14.8 pound taug was not on the cover. Instead, it was on a feature inside page. The cover photo turned out to be of some bikini clad female doctor holding a 6 pound taug. I did not think it was warm enough that week to wear my bathing suit. Go figure. It’s a good thing Dave Walker caught that state record sheepshead during cold weather.

Since learning in late February about Joe’s illness, I visited Joe on 4 occasions. The first two visits were in the hospital. The last two were with Dick Keck at Joe’s home. I learned from Amanda Joe had many visitors. I guess on one weekend he had about 15 people in his house at the same time. But many of you may not have visited Joe, and you may be feeling guilty you did not visit. Don’t feel guilty. Joe and I talked about some people not being able to visit for various reasons, the biggest two of which was you did not know what you would say, and you were not sure if you could keep it together if saw Joe. Joe fully understood those very real reasons. Don’t feel guilty.

It was my second visit to Joe in the hospital which was the toughest. Joe had just been told treatments would stop, there was nothing more to be done, go home and contact hospice. When I arrived at Joe’s room, he was sitting on the side of his bed, nauseated, and as down as a person can be. We talked, we laughed some, and maybe his spirits lifted, but not much. Then a strange thing happened. As I was leaving, not knowing if I would see Joe again, I put my hand on his hand and said, “God loves you.” Joe gave me a quizzical look. It was not an angry look. I don’t know what he was thinking, and I don’t know what prompted me to say those words “God loves you.” In response to his expression, I said, “I don’t get it either.”

The why question. The older I get, the more I ask the why question. Why do good people die young? Once sitting in a doctor’s office, I heard two old guys discussing the death in Lewes of a young man. The one said, “The good die young.” The other said, “That must be why we are both still living.” But in reality, good people also die old. As I struggle with this question, I think of a close friend of mine, a minister, a hunter, a fisherman, a man of God full of life, who died in his 40s leaving a wife and two very young children. In one of his sermons he explained there is disease and disaster in the world. Although God may not come in and stop the pain, God will walk with you and share your pain.

Did this apply to Joe? I did not get a chance to talk to Joe about this. But I can tell you what I saw in my next two visits to Joe at his home with my friend Dick Keck. I never again saw Joe exhibit the despair I saw during the hospital visit which ended with me telling him God loved him. I saw Joe planning things. His mind was alert. He had a good sense of humor. He was back in the fight. And his main goal, if not his only goal, was to want Amanda to be ok. That last visit was on a Friday. Amanda told me Joe enjoyed some nice outside weather that weekend, but rapidly declined on Monday. Paraphrasing the Poet Alfred Lord Tennyson, Joe set out to sea Monday twilight on a peaceful outgoing tide, he crost the Bar. Tennyson’s poem requests there be no sadness of farewell, having hopes to see his Pilot face to face.

Jack Henriksen gave this talk at a reception for Joe, and for Amanda, his wife, at Irish Eyes in Lewes, Delaware on Sunday May 22, 2016.